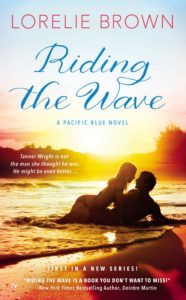 The gray-green swells of San Sebastian haven’t changed in ten years, but Tanner Wright has. The last thing he expects to find back on his home turf is the love of his life….

With a make-or-break world championship on the line, professional surfer Tanner Wright has come back to the coastal California hometown he left a decade ago, carrying only his board and the painful knowledge of his father’s infidelity. Now that Hank Wright is dead, Tanner intends to keep the secret buried to spare his mother and sister the burden.

The last time Avalon Knox saw her best friend’s brother, she was fourteen and he was a twenty-year-old surfer god. She’s never understood or respected the way Tanner distanced himself from the family that has embraced her. But now she has the professional chance of a lifetime: to photograph Tanner for the competition—if he’ll agree.

Out on the waves, they find in each other passion that’s impossible to resist. And Tanner’s not the only one trying to move forward from his past. As the competition heats up, secrets get spilled, and lust takes over. How close can Avalon get to this brooding surfer…without getting burned?